Central Christian Academy is so thankful to have music back in our school program this year. Psalm 100:1 says,

“Make a joyful noise to the Lord, all the earth! Serve the Lord with gladness! Come into his presence with singing!” 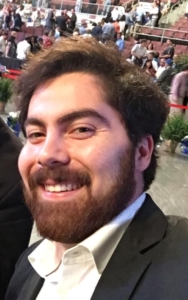 Mr. Landon Gray will be teaching music weekly to the students of CCA. He has great plans for age-appropriate learning that will include percussion, reading music, playing the recorder and hopes to develop a choir for our school programs.

Landon Gray is an alumnus of the University of North Texas and a musician who specializes on the trumpet across various styles of music. Gray was the recipient of several awards during his time at the University of North Texas, including the Donald E. Waugh Music Scholarship and the Vivian S. Spohn Music Scholarship. Since graduation, Gray has appeared numerous times with the Ukiah Symphony both as a featured soloist and as part of the orchestra. He has performed in the pit orchestras of many productions, including West Side Story, Chicago, and A Chorus Line as part of the North Bay Theater Company and the Summer Repertory Theater.

Besides performing, Gray is a passionate teacher and loves discovering ways to share music with others. He enjoys instructing both private and group music classes. Gray also works to bring music into the public schools of Western New York as part of a sponsorship with the “Create Project.” Originally from Santa Rosa, California, Mr. Gray now lives here in Dunkirk, New York where he performs regularly as a member of Chautauqua Brass.